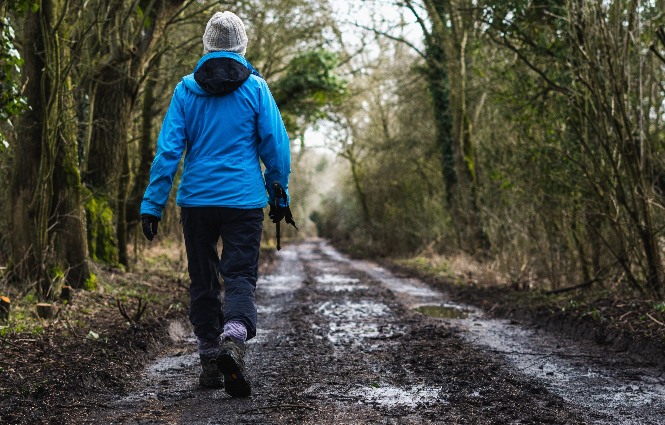 Ahead of this autumn’s government spending review, outdoor charity Ramblers is calling on the UK government to prevent another “winter of unwalkable paths” by making emergency funding available to repair damaged and muddy paths.

Last winter, as COVID-19 restrictions made outdoor exercise the main way to socialise, wet weather combined with thousands of people discovering the joy of walking for the first time resulted in many paths suffering damage under the strain, the charity says.

From October 2020 to March 2021, the Ramblers received twice as many reports from members of the public concerned about muddy or waterlogged paths as for the same period the previous year – at least one report every day.

Tom Platt, Director of advocacy and operations for the Ramblers, said: “One of the few positives of a tough year was that many people discovered how walking boosts their physical health and mental wellbeing.

Related: Being outdoors makes you feel happier, 85 per cent of children and young people say

“We have come to rely on our local parks and paths as safe places for exercise and enjoyment, yet over the winter, muddy and waterlogged paths made walking incredibly difficult or even impossible in many places.”

Funding for path repairs is essential as we head into the colder, wetter months and the Ramblers is urging the government to act now to avoid a repeat of last year.

It warns that under-resourced local authorities struggle to maintain paths after years of budget cuts; while damaged paths have become walkable again over the summer, lack of repair work in many areas means problems are likely to quickly resurface once the winter weather arrives.

Tom added: “Now is the time for government to invest in our paths and show a commitment to build on the momentum of more people walking.

“A relatively small investment would help protect the places we love to walk and enable people of all abilities to safely enjoy the benefits of walking in nature.

“It will pay for itself many times over in health and wellbeing benefits.”

The Ramblers recently led a coalition of charities in a letter to the Prime Minister warning that the government is missing vital opportunities to improve access to nature as we emerge from the pandemic.

This autumn sees a number of opportunities for the Government to fulfil its promises to ensure more people can connect with nature.

Alongside the final stages of the Environment Bill, the Government’s Comprehensive Spending Review, planning reforms and more information on Environmental Land Management payments are expected in the coming months.

Alan Manning from the Greater Manchester and High Peak Ramblers, said: “Last winter many of our popular paths, particularly those that gave access to important local green spaces, were very difficult to walk and at times impassable, denying access to all but the very agile.

“Path surfaces have not recovered and wide areas of vegetation on either side of paths were eroded away and have not re-established, without action now the coming winter will again see many of our local spaces denied to families and anyone with some mobility difficulties.”