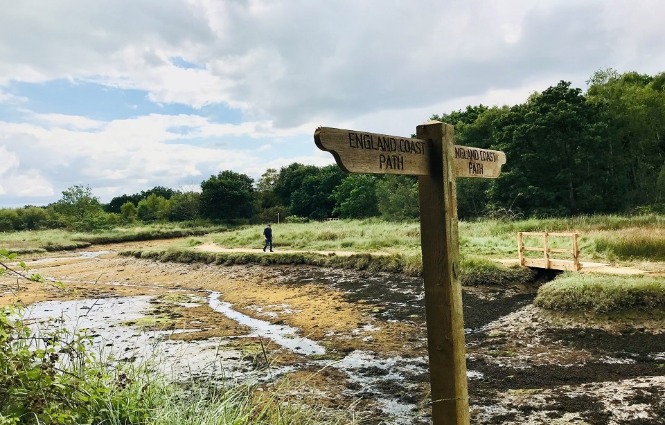 Hampshire Things to do

The Calshot to Gosport and the Gosport to Portsmouth stretches are the first complete sections of the England Coast Path in Hampshire to open.

The route will eventually help connect the country’s entire coastline into one long National Trail.

The walk will take people through some of the finest landscapes in England.

For the first time in the history of public access, legal rights of public access will be secured to typical coastal land, including beaches, dunes and cliffs, allowing walkers to access places they’ve never been before.

“It includes the unspoiled countryside with its abundance of wildlife.

“The industrial and bustling maritime Solent and beside one of the most densely populated areas on the south coast of England.

“At a time when the benefits of connecting with nature are clearer than ever.

“It is fabulous that we are opening up this nearly 52 mile walking route on the banks of the Solent for people to enjoy.”

This route starts at Calshot Spit, a popular beach and water sports location.

It is also a natural shelter to the Calshot Nature Reserve where birds like oyster catchers and ringed plover can be seen.

Heading northwest towards Hythe, you have sight of the areas industrial heritage – the decommissioned Fawley Power Station and the Fawley Oil Refinery.

Once at Hythe waterfront, a short hop on the Hythe Ferry will take you across to Southampton Town Quay, a busy international port with many historic sites.

Once you cross the River Itchen, you carry on the route through Woolston and Netley, where you might glimpse a 16th century castle and ruins of the 13th century Abbey.

You then pass the Royal Victoria Country Park, which was once the home of the biggest military hospital in the Victorian Empire and a popular tourist attraction.

Continuing on to Hamble-le-Rice and through Hamble Common, there are more sites of historical and archaeological interest.

There are remains of the 16th century St Andrews Castle, a 19th century gun battery and a second world war anti-aircraft gun emplacement.

A short ride on the Hamble-Warsash Ferry (also known as the ‘Pink Ferry’) takes you across the River Hamble.

Then along the shore through the Hook-with-Warsash Local Nature Reserve. Many species of wading birds and wildfowl can be spotted here, including turnstones, linnets and skylarks.

In the shingle you can also see plant species such as sea kale, sea beet and yellow thorned poppy.

The final part of the stretch takes you along the clifftop coast path to Meon Shore and Titchfield Haven National Nature Reserve.

Then down to the shoreline at Lee-on-the-Solent.

From Lee-on-the-Solent you pass through Stokes Bay, and inland around Browndown Military Training Area before heading to Gilkicker Point.

This area includes the Browndown Site of Scientific Special Interest (SSSI) and the Gilkicker Lagoon SSSI.

Although the lagoons saltiness creates a harsh environment where species have to adapt to survive, five species of mollusc of national rarity live in the lagoons.

The route then heads inland around Fort Monckton and back to the coast around Clayhall before reaching the Gosport Ferry.

You pass the perimeter of the historic Royal Clarence Yard and Royal Naval Hospital.

Then carrying on over Millennium Bridge, past Gosport Waterfront then on to Fareham, passing the marina and creek.

The path continues around the headland with views of Pewit Island Nature Reserve, where the whole of Portsmouth Harbour and its iconic Spinnaker Tower can be seen.

These impressive sights continue up to Portchester Castle.

You pass through Port Solent Marina and eventually follow the seawall using the Pilgrims’ trail with views of Whale Island.

Home to HMS Excellent, the oldest shore training establishment within the Royal Navy, and its headquarters.

The route continues past the Continental Ferry Port and beside HMS Nelson.

Approaching Portsmouth you pass by the Historic Dockyard, home to HMS Victory, HMS Warrior and the Mary Rose Museum.

Then through Gunwharf Quays, a vibrant waterside shopping and dining location.

The route passes the impressive Round Tower site at the mouth of the Harbour. Originally ordered to be built in wood by Henry V in 1418, the tower was rebuilt in stone by Henry VIII.

The route concludes at the Historic Old Portsmouth home to a small fishing fleet and fish market at Camber docks.