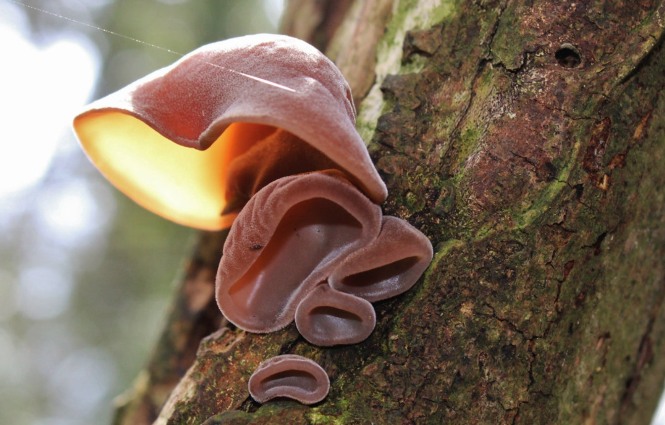 Jelly ear, devil’s fingers and powdercap strangler are among the spookiest fungi found in the UK, according to a list released by the National Trust in time for Halloween.

The list of mysterious species, accompanied by a compilation of images, aims to shine a spotlight on the ‘weird and wonderful’ world of fungi and raise awareness of the critical role they play in our ecosystems.

Varieties pictured range from the eerily named powdercap strangler, a parasitic species that grows by taking over another toadstool, to yellow brain, stinkhorn and beefsteak fungus.

Fungi are a vital food source for wildlife and a crucial part of our ecosystem.

Some can be poisonous – so it’s best to simply look and not touch.

Ben McCarthy, head of nature conservation at the National Trust, said: “Fungi are the forgotten kingdom of our ecosystems.

“They’re essential to life on earth and are as diverse a group of organisms as plants or animals.

“The strange and spooky formations you see above the ground are just the fruiting part of the fungi – beneath the soil, they might stretch for miles and miles.”

“They are a vital part of the decomposition process, helping to break down material in woodland which goes on to feed other plants and organisms, keeping the ecosystem going.”

There are estimated to be between 2.2 and 3.8m species of fungi in the world – the majority of which remain unidentified.

More than 40 new species from Britain have been discovered in the last ten years.

Enthusiasts can spend years searching for near-extinct species of fungi.

Their often-unpredictable appearance means some of the rarest varieties can survive for more than a hundred years hidden underground or inside other species, only to be rediscovered just as they were about to be deemed lost forever.

In 2017, the extremely rare and eerily named powdercap strangler fungus was discovered at the Trust’s Clumber Park in Nottinghamshire, having only been found at a handful of other places.

Ben continued: “Discoveries like this show just how much we’ve still got to learn about the weird and wonderful world of fungi.

“These amazing species are there to be admired, but it’s important that people take only photos – picking prevents other people from enjoying our fungi and removes the home of invertebrates the live inside the mushroom.”

Like plants and animals, many species of fungi are under threat from changes to habitat, including through deforestation and toxic pollution.

1. Devil’s fingers – this species has slime-covered red tentacles which slowly protrude from an egg. It smells like rotting flesh.

Flies are attracted by the smell, pick up the spores, which are found inside the slime, and then carry them off. This helps the fungus colonise new places. It is originally from the southern hemisphere, and is a rare find in Britain

2. Powdercap strangler – the Strangler is parasitic fungus that grows by taking over another grassland fungus, the earthy powdercap.

The Strangler bursts out of the top of the stem, having overcome its host, resulting in a two-coloured toadstool.

There have only been a few sightings in the UK, including at the Trust’s Clumber Park in Nottinghamshire

3. Jelly ear – these velvety, ear like shapes are found in woodlands in the UK growing on decaying wood

Sometimes this wood is buried beneath the ground, so the fruiting fungus emerges from the earth, like eerie fingers.

5. Yellow brain – a brightly-coloured jelly that feeds on other fungus on trees and is commonly found in the UK

6. Stinkhorn – also referred to as Witch’s Egg, this mushroom emerges from an underground egg and has a putrid scent.

Its scientific name is Phallus impudicus, and its shape was a cause for embarrassment among Victorians

7. Collared earthstar – this fungus starts life as bulb-shaped before its outer rays unfurl, leaving a ball that spookily puffs out spores from a small opening when a raindrop hits.

8. Candle snuff – a small pallid fungus that looks like snuffed-out candle wicks and protrudes from dead wood. Very common in the UK

9. Beefsteak fungus – the flesh of this parasitic species resembles raw steak, and its pores often leak a sticky, blood-like substance

Where did Halloween come from?