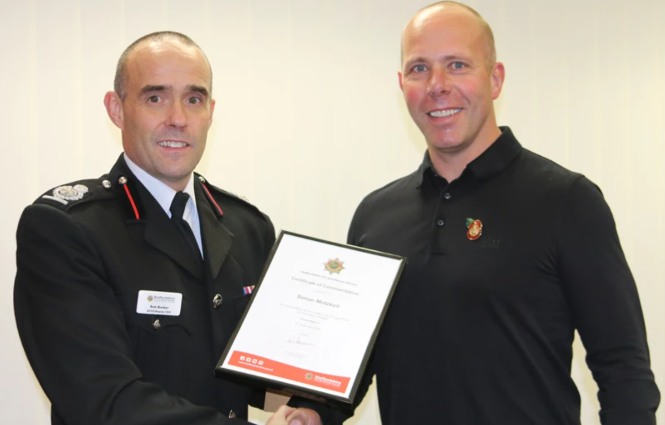 The lives of four people have been saved thanks to the quick-thinking men who rushed to the rescue after spotting a crashed motorhome in Staffordshire.

Akam Ali and Simon Motzkeit managed to pull all four occupants out of the motorhome moments before it exploded and have now been honoured for their bravery.

The vehicle contained gas cylinders which are believed to have ignited when it smashed into a streetlight and flipped over while leaving the A38 northbound in Lichfield.

The driver of the van, his wife and two friends soon became trapped inside the burning vehicle as the flames took hold.

Mr Ali was at a nearby petrol station when he spotted the incident and quickly dodged traffic to sprint across the 70mph carriageways on foot to offer help.

Related: Jail for arsonist who set fire to friend’s campervan

Mr Motzkeit – an off-duty firefighter for West Midlands Fire Service – was travelling northbound with his children when he noticed the motorhome lose control.

He immediately parked his vehicle and made his way across the carriageway to the scene.

The pair have been awarded the Chief Fire Officer’s Commendation Award by Staffordshire Fire and Rescue Service following the horrific blaze on July 27, 2019.

Crew Manager Bryan Brindley said: “From my observation of the fire and the positioning of the vehicle following the collision, I believe both men demonstrated a great level of bravery and put themselves in a position of risk in order to save the lives of those involved.

“I also believe that if not for their actions, the four occupants may not have been able to escape by themselves and may have lost their lives in such a tragic way.”

A stark reminder of the dangers of carrying gas cylinders onboard. Easy to forget the dangers. Pleased this was a good outcome for those involved in this crash.