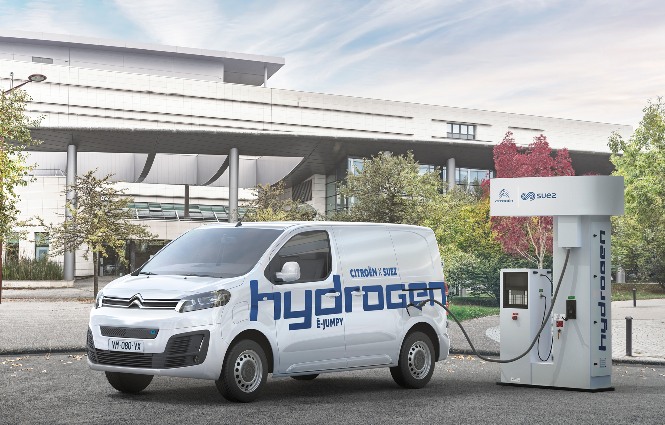 The SUEZ Group has been conducting real world trials of Citroën ë-Jumpy Hydrogen at its Carcassonne site in France and has reported positive feedback.

A complete refuel in the Citroën ë-Jumpy Hydrogen takes just six minutes from a 350 bar pump, while stations fitted with a 700 bar pump can refill in half that time.

The 10.5kWh battery – providing a 31 mile backup power supply if the hydrogen tanks run out – is very easy to charge on a standard 230V socket.

The range meets the needs of the 44 per cent of customers in the compact van segment who say they occasionally travel more than 185 miles.

The load volume of ë-Jumpy Hydrogen is the same as for the standard Citroën Jumpy, with 5.3m3 for the medium body style and 6.1m3 for the XL version.

This also means a payload and towable load of up to 1 tonne on both versions, and a width between the wheel-arches of 1.25m.

The hydrogen technology combines a Lithium-ion battery with a fuel cell connected to hydrogen tanks.

When hydrogen and air are brought into contact with a catalyst, the fuel cell generates electricity to power an electric motor.

The only emission produced is water vapour.

Compared to a battery, a fuel cell is considered more as an energy converter than a storage device.

This hybrid solution was chosen by Citroën following research conducted in partnership with Symbio, a joint venture specialising in fuel cells created by Michelin and Faurecia.

Citroën ë-Jumpy Hydrogen benefits from both a 10.5kWh Lithium-ion battery and a 45kW fuel cell, powered by three 700 bar hydrogen tanks, developed by Faurecia, with a storage capacity of up to 4.4kg of hydrogen.

Because this solution positions the battery pack under the seats at the front and the hydrogen tanks under the floor in the rear of the van, the modifications have no impact on the load volume of the vehicle.

This system also ensures there is no compromise in performance, with a fuel cell powerful enough to guarantee constant speed on the motorway.

The battery then provides the energy required for acceleration and the extra power required when starting and for the first few miles on the road.

The versatile technology seen in Citroën ë-Jumpy Hydrogen will play an essential role for mobility solutions in the transition to greener energy sources.

What Car? names its 2022 Van and Commercial Vehicle Awards winners