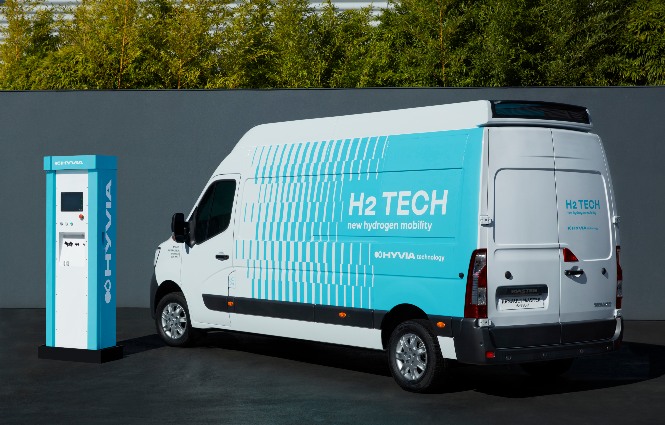 Hot on the heels of the Ford Transit hydrogen van prototype, the Renault Master hydrogen van H2-TECH prototype has now also been unveiled.

Available from 2022, the all-new Master Van H2-TECH offers zero CO2 emissions, increased range, and fast refuelling time and is designed to transport goods and packages with ease thanks to its 12m3 cargo volume and a range of up to 310 miles.

Today, hydrogen mobility is particularly useful for vans – it’s perfect for high loads and intensive use.

The Renault Master hydrogen van is equipped with a 30kW fuel cell, 33kWh battery and four tanks containing 6kg of hydrogen combined and is produced entirely in France.

The van itself is built at Renault’s Batilly plant, while electric and hydrogen integration is completed by PVI, a Renault Group subsidiary based in Gretz-Armainvilliers.

The electric motor is produced at the Cleon plant, while the fuel cell assembly will begin at the Flins plant by the end of 2021. The hydrogen tanks are sourced from Faurecia.

HYVIA has also unveiled its hydrogen refuelling station prototype as it looks to deploy its own entire hydrogen-based ecosystem, including green hydrogen production and distribution, and a range of fuel cell-powered light commercial vehicles.

HYVIA’s hydrogen refueling stations will be available to purchase, lease or rent and will allow fast fueling times similar to that of ICE vehicles – just five minutes – to maximise vehicle availability.

The system then compresses H2 into storage, before dispensing it into the vehicle when needed.

The fuel stations will also be assembled at the Flins plant in Northern France.

Other HYVIA prototypes currently being worked on include the Master Chassis Cab H2-TECH: a large van with even more cargo space (19m3) and a range of around 155 miles.