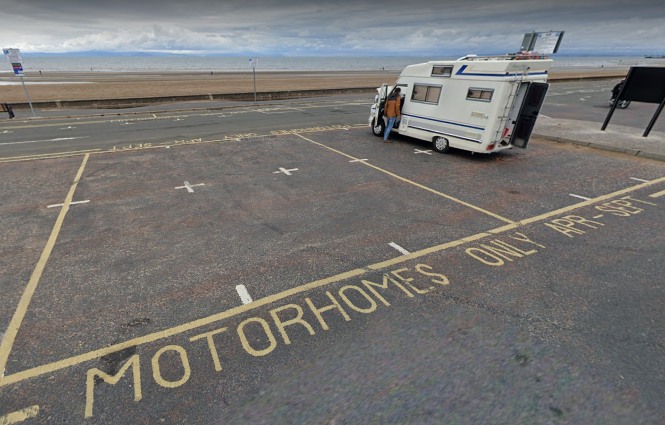 An overnight motorhome parking pilot in Scotland has been deemed a success despite falling short of its expected financial projections.

Councillors will be asked to set aside £100,000 to make the pilot motorhome stopover at Ayr and Girvan permanent and introduce a further three sites for trial.

In March 2021 South Ayrshire Council agreed to a pilot motorhome and camping parking at Ayr and Girvan, allowing them to park in serviced bays for £5, restricted to one night.

Now, the recommendation has been made to expand the scheme, including doubling the fee to £10 per night and allowing multiple day stays.

Councillors have also been asked to consider a further three pilot schemes North Shore Road Car Park, Troon; Links Road Car Park, Prestwick; and Foreland Car Park, Ballantrae with setting up costs of £35,000 on top of the £78,000 to make the other sites permanent.

Income from the motorhome bays would ‘meet future revenue costs’, councillors were told when agreeing to the pilot last year.

A report to the Leadership Panel stated that ‘overall the trial scheme has proved a success’ and recommends permanent overnight parking at Knockcushan Street Car Park in Girvan and Ayr Esplanade Car Park.

The paper also recommends permanent arrangements at Ayr, but states that issues caused by ‘car enthusiasts who congregate within the car park every evening’ have to be addressed.

It also suggests an automatic entry and exit would remove the need for enforcement patrols.

Councillors have been asked to consider use of coach parking at Cromwell Road Car Park as a potential overspill.

The report states: “Whilst this outlay would be greater, there would be a significant reduction in running cost as there would be no need for manned monitoring and enforcement arrangements meaning a sum of £4,000 would be required.”

“Initially, there was some resistance to the scheme from residents of streets located near to the Esplanade Car Park.

“Concerns were raised in relation to the suitability of the location but it quickly became clear that the main cause for concern was the fact that long standing issues in relation to motoring enthusiasts, and the anti-social behaviour displayed by this group, were not addressed by the scheme.

“The feedback received for the Girvan site was overwhelmingly positive.

“Customers found the choice of location second to none and the additional facilities on offer were very well received. Demand for spaces well outstripped supply.”

Excellent news hope this starts a trend across all UK councils

Revenue would be down with Covid uncertainty, plus the lack of foreign travellers, but it’ll rise as the months pass by. Well done and thank you from the motorhome community.

Great idea and I hope that more councils will do this. Thank you to those councils who realise that motorhome owners will spend money in their towns, and are happy to pay a nominal fee for a safe parking space.