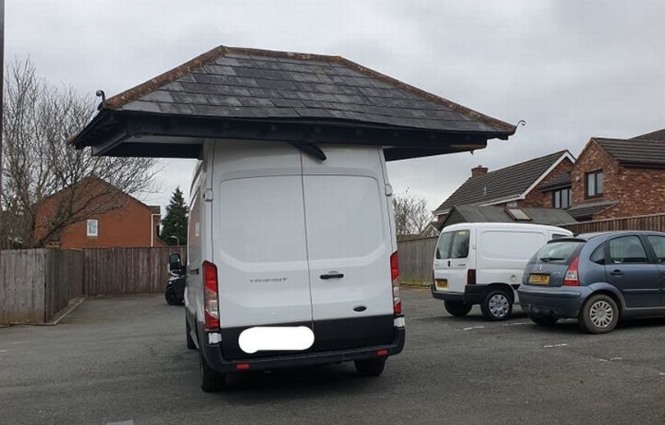 A van driver has been left red-faced after accidentally taking the roof off the entrance to a residential car park.

A resident, who wishes to remain anonymous, witnessed the event unfold in Exeter yesterday (February 8).

Speaking to DevonLive, he said: “The driver of the van was helping a friend or a family member move in.

“Suddenly I heard this noise.

“I can’t even describe it, as soon as I heard it I flew to the window.

“I saw the driver jump out of the van and he was screaming, effing and blinding.

“The roof ripped right off the entrance pillars and was on top of the van.

“Usually that roof is sat up on pillars, and as he has gone to drive through he has made a bad judgment error – and at some speed i can image – and taken it off.

“I am surprised it hasn’t happened sooner because when I went outside to see what had happened, I saw that one of the pillars which was in the ground was soaking wet and looked rotten.

“It’s made me think, with all of the wind that we have had, how hasn’t this happened sooner.

“Fire crews turned up and they were puzzled. The AA also turned up but they have both gone now.

A spokesperson for Devon and Somerset Fire and Rescue Service confirmed they had been on the scene.