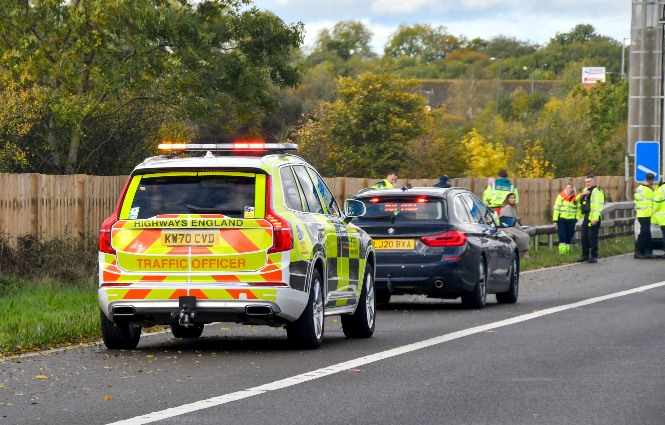 Anxious drivers want to see more police on the roads, with as many as 79 per cent worrying about how long they’ll have to wait if they need help.

Concerns about ‘invisible policing’ are revealed in a poll by Auto Express, which shows that 83 per cent of drivers want to see more road patrols.

Some 69 per cent say they would feel safer and more secure on the roads, if police were more visible – and police agree.

Steve Fowler, Auto Express editor in chief said: “With over 40 million vehicles on UK roads, the decrease of visible roads policing is a growing concern for all road users.

“Dash cams and speed cameras can help by identifying offences, but they can never replace an experienced police officer.”

Aligning with the poll results, an Auto Express interview sees the Police Federation’s national driver training and pursuits lead Tim Rogers – one of the UK’s most experienced traffic cops – slamming the dire state of ‘invisible’ traffic policing on our roads today.

A report by HM Inspector of Constabulary that was published early in the Covid lockdown also slammed UK police forces for ‘inadequate’ roads policing, pointing to the decline in numbers of skilled traffic officers, a lack of strategy and poor training.

Tim Rogers said: “Back in 2009, West Midlands Police – which is my force – had 20 different small traffic divisions, and we’d be putting out around 30 cars every day.

“Then you think about what we’d have inside those cars in terms of the training, skill and ability needed to be classed as a traffic officer able to deal with myriad road-traffic offences.”

However, Tim claims standards have been slipping as a result of budget cuts.

“Government is saying there’ll be 20,000 additional bobbies, but they’re just putting back what they’ve taken from policing over a number of years, and with insufficient thought about the infrastructure that also disappeared as part of those cutbacks, including the investment in training,” he said.

“In three years’ time, 30 per cent of the workforce will have less than five years’ service.

“To train people to an adequate level to deal with the issues on the road takes years, it takes a lot of investment and we simply haven’t got that.

“We police by the consent of the public.

“A dash cam can identify an offence and a summons can be sent out, but many of those who commit road-traffic offences are involved in other criminality.

“We’re missing that, and it’s what the public wants us to deal with to keep them safe.

“The standard of driving is pretty appalling, but the people you’re going to moderate by sending out letters are those like me, who’ll take greater care. Is that who we want to be targeting as a police service?

“Potentially alienating them, while the high-level criminals continue to drive like idiots?”

“That’s why we need that bobby interacting with drivers and getting hands on.

“But most feel undervalued, and their roles diluted.

“Ask traffic officers nowadays what percentage of their time is spent on roads policing and they’ll say very little, as they’re pushed from pillar to post and mismanaged with jobs that have nothing to do with road safety.”

The amount of dangerous vehicles and drivers you see on the roads is insane. It’s no surprise when you think of how little police are on patrol and even then, officers seem to turn a blind eye to what’s an obvious vehicle defect.