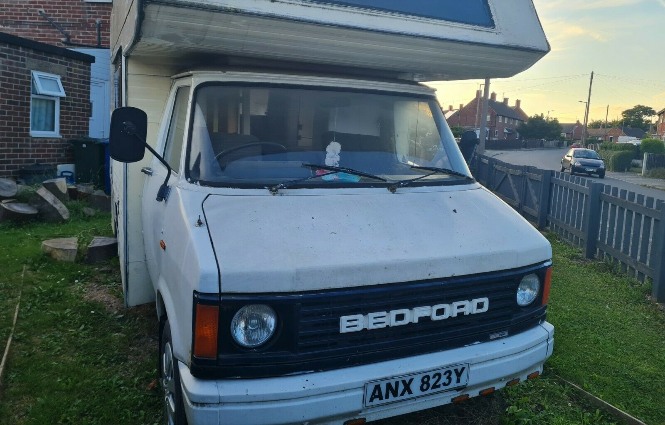 A man has posted a very honest but very amusing eBay advert for his Bedford CF campervan – describing it as a ‘slab of misery on wheels’.

The Bedford CF is currently up to £770, with three days left to go on the auction.

In the advert, the owner describes how he didn’t want a van, but his girlfriend did “so we comprised and purchased a camper”, and he set about doing it up.

But then the woman left him, “probably for a man with a much more impressive motorhome than mine”.

The advert reads: “Up for sale is my 1984 Bedford CF campervan.

“A perfect restoration candidate for another coerced partner, or sadist.

“I never wanted a campervan, my now ex girlfriend did.

“So we comprised and purchased a camper, without ever laying eyes on it first might I add.

“It was intended to be a ‘joint’ project which in reality turned into her standing around for half a day complaining about the shed we’d bought, and the remainder of the time on my back about how long it was taking to transform it into her perfect tranquil cabin on wheels.”

“Fast forward a few months and she decided to up and leave (probably for a man with a much more impressive motorhome than mine) leaving only behind this sad slab of misery on wheels.

“Apart from being an eyesore and driving down local property prices, it serves as a personal reminder that the last few years of my life have truly and utterly been a waste.

“As you can probably tell by this point I’m eager to get this thing off of my drive and draw a line under this turbulent chapter. So without further ado here’s a little more about the van.”

He then goes on to describe the good points of the van, saying that it’s largely rust free underneath, good progress has been made on the conversion, and it doesn’t leak anymore.

It also comes with everything needed to convert it into a campervan, including a full wiring kit, water tanks, cladding, and a heater.

However, the advert then goes on to describe more of the motorhome’s bad points – including the fact that it doesn’t run any more.

It’s also got corrosion to the bodywork, will need repainting, and worst of all – “it taunts me daily of my past failures and lost love”

The advert continues: “If you’ve made it this far you are probably mentally unwell or still being forced into making a perfect love den for those romantic weekend getaways, either way, I applaud the dedication.

“If you do decide to bid on it and God forbid you actually win, you will have to get it transported or collect it yourself as I have neither the time, the means or the will to deliver it for you.

“I will do my best to answer any serious queries, but if you ask me about the flow rate of the shower for example; I probably won’t.

“It’s not perfect (far from it) nor road ready so don’t expect it to be and you won’t be disappointed, it’s a cheap project and a good way to break into the world of motorhome owning.

“I’m just trying to get a little money back so I can go on a heavy night of drinking, perhaps visit a lady of the night depending on how well the auction goes and then close this awful chapter of my life.