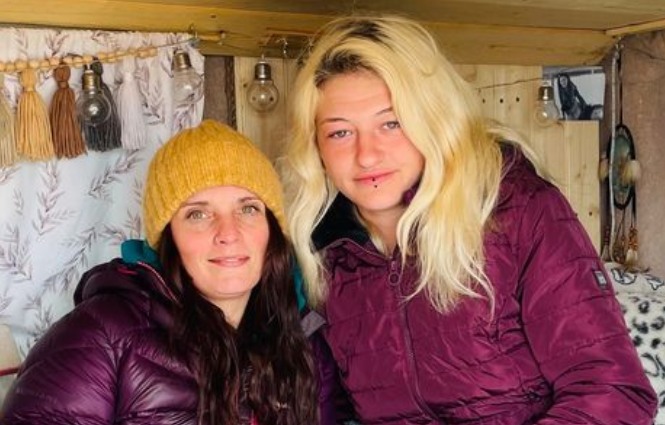 Two people have been arrested this week after an alleged pepper spray attack on a group of ‘van dwellers’ in Cornwall.

NHS worker Sahara Hawker, who lives in a van, told CornwallLive how she was having tea with a friend at her van, parked near Little Fistral, at around 10.30am on Monday April 4 when she heard a disturbance.

She rushed outside to see friend, and fellow van lifer, Vikki Bracken, on the floor in agony covering her face.

Miss Hawker said: “She was on the floor, screaming in panic.

“I went over and helped her.

“She was on the floor, the dog had escaped and she was screaming her head off.”

She said that Miss Hawker and another van lifer had both been hit with what appeared to be pepper spray.

She continued: “I went down to speak to the woman to find out why.

“What she said to me was that she said she hated van dwellers, and that claimed we were poisoning dogs.

“She started screaming at me, saying we’re lazy bums.

“I work for the NHS – everyone here also has professional jobs.”

Ms Bracken did not go to hospital, but bathed her eyes in milk after the pepper spray rendered her virtually blind for around five hours.

Related: How Tinder made me fall in love with van life

Ms Hawker added: “I have been here since Sunday with my van.

“Seeing my friend the way I saw her just broke.

“Been sitting with her all day, and every time there’s someone at the door she’s terrified to be here.

“Her face is still burning, swollen.

“I normally don’t lock my door down Little Fistral but I did last night.

“This, to me, was an indiscriminate attack on van dwellers.

“It doesn’t matter, they came down to harm someone.

“Then obviously what happened happened next.”

A Devon and Cornwall Police spokesman said: “Police were called at around 10:30am on Monday 4 April to Towan Head Car Park in Newquay following reports of an altercation having taken place; it was alleged that at least one person had been assaulted with a PAVA spray.

“Units attended and two people were detained in connection to this matter.

“She has since been released under investigation pending further enquiries.

“A local man in his 70’s who was also detained has since been released with no further action to be taken at this time.”

Miss Hawker explained that many locals don’t like their presence in the area, accusing them of urinating in the streets and making a mess – things she denies ever happens.

Miss Hawker, at the time, told the national press that this was discriminatory against people who can’t afford a home.

Sorry to hear what has happened to you and your friend.
I’m discussed on reading this! But since covid people (some) have turned very nasty. I wont go down as far as Cornwall now due to the nasty things the people there have been posting up on FB. Keyboard worriers
Why do people think they have the right to behave like that?. To me its just jealousy as they’ve not got the guts to do anything different from the Jones..
I hope they get some form of punishment
All the best to you all