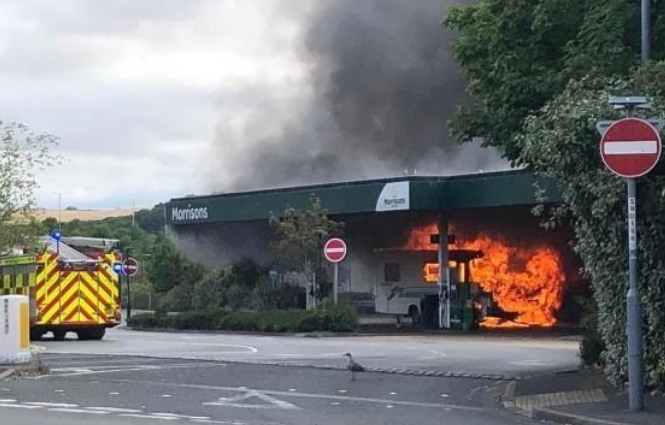 A motorhome has been destroyed after catching fire while filling up at Morrisons filling station in Weymouth.

The occupants escaped from the vehicle unharmed, it has been reported.

Firefighters were called at just after 9am this morning (July 30).

District fire commander for Weymouth and Portland, James Plumley said: “Crews have been called to a significant fire of a large camper van. The cause at this moment is unknown.

“Significant damage has been caused to the forecourt, to the roof and to the petrol pumping equipment. It has completely destroyed the camper van.

“Crews from Weymouth and Dorchester are here and an aerial ladder platform from Weymouth is en route. There are about 18 to 19 firefighters on the scene.

“Crews have done an excellent job at stopping the fire from spreading.”

The filling station remains closed and is expected to be shut for some time while the damage is repaired.

A Morrisons spokesperson said: “Our petrol station will remain closed until further notice but thankfully no-one was hurt. The main store is now back open too.”

Weymouth town councillor Graham Winter said: “I was shocked to see the burnt out campervan in a petrol station, the ramifications of which were quite honestly horrendous.

“However, thanks to the quick action from staff and the prompt response from the fire service they were able to avert what could have been a major disaster.

“The fire brigade and staff at Morrisons, I would like to congratulate them, that they managed to contain a blaze and avert a major danger.”