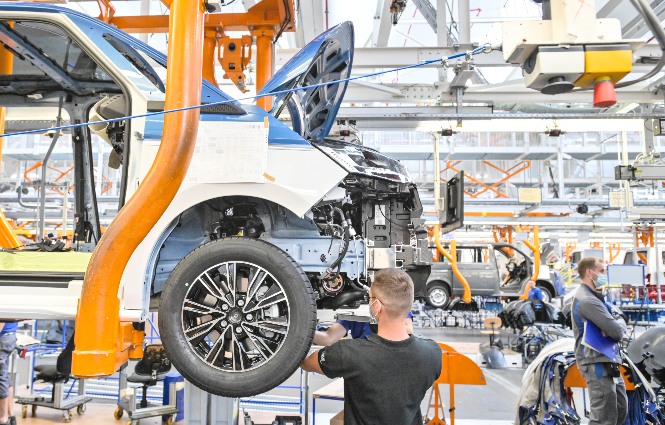 The first production vehicles of the new Volkswagen Multivan are coming off the line in Hannover, Germany.

The new Multivan, which is replacing the Caravelle, is the first vehicle to go into full production in Hannover based on the Modular Transverse Matrix (MQB).

Conceptually, it is making a huge leap: included for the first time in the drive system programme is a plug-in hybrid.

A new interior concept makes the Multivan even more versatile.

Why is the Volkswagen Caravelle being replaced with Multivan?

Josef Baumert, board of management member for production and logistics at Volkswagen Commercial Vehicles said: “For all of us in Hannover that was a challenging task, which was executed in every detail.

“Despite the challenges caused by the coronavirus pandemic and the fraught situation with regards to supply of some parts, series production of the new Multivan is now starting on schedule.”

The start of production is a milestone in the transformation process of Volkswagen’s main commercial vehicle plant.

Preparations at the plant are also currently underway for production of the fully electric ID. BUZZ next year.

The integration of the new Multivan into the production processes and the construction of new manufacturing facilities were done while production in the plant carried on in parallel.

The expansion of automation and the systematic implementation of the digitalisation strategy in the manufacturing operation is increasing production efficiency once again.

The degree of automation is around 77 per cent during the manufacturing of the Volkswagen T6.1, with the new Multivan it is 93 per cent.

“The systematic improvement of productivity is an investment in the future”, says Baumert.

Machine supervisors look after multiple stages in parallel from one control stand.

They are in constant contact with the machines via smart watch digital devices.

If any parts are needed or servicing is due, this gets reported well in advance, thus avoiding any downtime.

In the paint shop, having had a new topcoat system commissioned two years ago, a new bi-colour system is now in use.

It’s here that the new Multivan vehicles get their popular two-tone paintwork finishes.

An automated logistics systems for parts increases efficiency in the assembly process.

Self-driving carrier vehicles in the factory bring parts directly from the stores to the assembly lines.

In the future, T6.1, Multivan, ID. BUZZ and ID. BUZZ Cargo will all be made on just two main lines.

Production of the current T6.1 Transporter is to carry on until 2023, when it will be replaced by an all-new van based on Ford’s next-generation Transit Custom.

What do you make of the new ‘Caravelle’? Share your comments below.