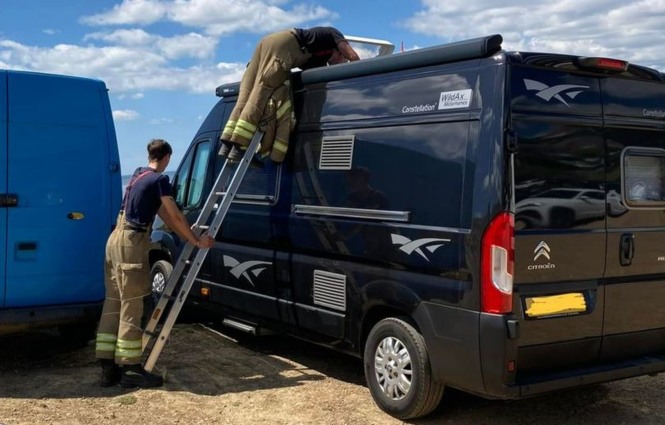 Firefighters came to the rescue of two dogs locked inside a hot campervan parked in Bridport, Dorset yesterday (Sunday, July 10).

The temperature inside the vehicle was recorded as 36C.

The dogs were described as “looking pretty warm” and did not have any water.

Crews said “advice was given” to the animals’ owner.

As the Met Office warns of a heatwave for parts of England and Wales in the coming week, officials have urged people not to leave animals in vehicles when temperatures are high.

A spokesperson from Bridport fire station said: “Just as we were leaving a previous incident at Seatown, a concerned member of public told us of two dogs locked inside a campervan.

“Upon inspection crews found the two dogs looking pretty warm in cages with no water and just a roof vent open.

“Crews used a triple extension ladder to get on to the roof and using a thermal imaging camera found the temperature inside the van was at 36C.

“Just as we were informing the police the owner arrived and opened up the van. Advice was given.

“It goes without saying, in these temperatures, do not leave animals in vehicles.

“Even with the windows open temperatures can be very high.”